December 17, 2018
by NewFuels
Comments Off on Dear employees and partners!

Dear employees, coleagues, partners! Greeting of the coming festivities! I want to wish you to meet the wonder that we all are waiting for. Let this magic festivity brings us the things we were waiting and hoping for. I wish everyone to find the happiness: in a person or beloved work, career or cozy home. I wish you a strong health, a faith in miracles and a vigor of life! Happy Holidays!

Energy Resources CHP RSEZ SIA Chairman of the Board

November 13, 2018
by NewFuels
Comments Off on Congratulations on The Proclamation of the Republic of Latvia!

We congratulate everyone on the 100th anniversary of The Proclamation of the Republic of Latvia!

During the exhibition-fair “Days of the Intrepreneurs in Latgale 2018” on 21 September, 2018, an award ceremony of the competition “Enterprise of the Year” was held in the Embassy of Latgale “GORS” and the most successful companies were rewarded by results of work of 2017.

We are proud to announce that “NewFuels” RSEZ SIA got an award “RSEZ Enterprise of the Year” and a Gratitude for investment in Rezekne economy.

We want to thank Rezekne City Council and the Chairman Aleksandrs Bartaševičs and all the partners of cooperation and local institutions, such high results could be reached only in collaboration with them!

On August 24, 2018, for the seventh year Rēzekne Special Economic Zone (Rēzekne SEZ), after evaluating the indicators of 2017, presented “The Enterprise of the Year” awards. The competition is organised with the aim of acknowledging and honouring the most successful companies of Rēzekne SEZ, as well as their products and services by evaluation of the companies’ results for the previous year.

In the group of large and medium companies “NewFuels” RSEZ SIA received Acknowledgment for the contribution to the development of Rēzekne SEZ in 2017 and won the honoured 3rd place as well as was rewarded in following nominations:

1st place in nomination “THE SERVICE PROVIDER OF THE YEAR”

2nd place in nomination “THE PRODUCER OF THE YEAR”

In the group of small companies the Acknowledgment for the contribution to the development of Rēzekne SEZ in 2017 went to “Energy Resources CHP” RSEZ SIA as well as the second place in the competition. The enterprise became the best in the following nominations:

1st place in nomination “THE PRODUCER OF THE YEAR”

We want to thank our employees for the common work in reaching the high results, as well as staff of RSEZ and the Head miss Sandra Ezmale, Rezekne City Council and the Chairman mister Aleksandrs Bartasevics and all the enterprises, their support and cooperation help us to get high assessments and it gives extra incentive for development of our business as well as development of Latgale region and Latvia in general!

August 17, 2018
by NewFuels
Comments Off on Results of the GGL audit

We are glad to announce that on 08 August 2018 NewFuels RSEZ SIA has done annual audit for maintaining GGL certificate and received a certificate for compliance with the standard Green Gold Label S1. The certificate is valid till 20 September, 2019. 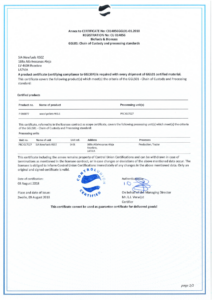 August 17, 2018
by NewFuels
Comments Off on Results of the ISO and OHSAS audit

We are glad to announce that on 1 June 2018 and 11 July 2018 NewFuels RSEZ SIA and Energy Resources CHP RSEZ SIA have done annual audit for maintaining ISO and OHSAS certificates and received a statement for compliance with the following international standards:

August 3, 2018
by NewFuels
Comments Off on Visit of Representatives of the U.S. Embassy

We were highly honored on 29 June, 2018 to welcome in our company the representatives of the United States Embassy – Charge d’Affaires Paul Poletes, Political Associate Jean Sweeton and Political Specialist Artjoms Ursulskis. During the visit guests looked at the production processes of “NewFuels” RSEZ SIA and “Energy Resources CHP” RSEZ SIA and discussed about the work and development of the companies.

We are grateful for the attention shown and hope for the further cooperation.

Dear employees and partners of cooperation!

In the middle of the summer we celebrate the most mysterious holidays – Ligo and Jani day. Blessing of the solstice comes into every home and the magic power unites people. Everything has a mysterious charm during this night – songs, fire on the hills and morning dew in the meadows.

Ligo evening enables to feel the power of old traditions, the greatness of nature and unites people with all living all around.

I wish you to enjoy the magic at least for the moment and let the magic power of the summer solstice gives strength and the smell of the flowers – cheerfulness till the next summer!

June 15, 2018
by NewFuels
Comments Off on Results of the ENplus audit

We are glad to announce that on 21 May, 2018 “NewFuels” RSEZ SIA has done annual audit for maintaining ENplus certificate. The company has received a statement for compliance of the produced pellets with the standards ENplus A1 and ENplus A2.