“NewFuels” RSEZ SIA and “Energy Resources CHP” RSEZ SIA are always happy to invest in the development of sports, so it was an honour to participate in the opening of the Inflatable Football Dome in Rezekne by supporting the project.

Sports Department of Rezekne City Council, represented by Aleksey Grehov, issued a Letter of gratitude for the Contribution to the development of sports in Rezekne in 2021 to “NewFuels” RSEZ SIA and “Energy Resources CHP” RSEZ SIA.

Football Academy of Rezekne/Children and Youth Sports school presented memorable prizes to Roman Vdovychenko, and, in turn, a set of soccer balls was presented to the team.

Rezekne became the first non-capital city in Latvia where such an Inflatable Football Dome was built.

Creation of it will significantly improve the training process for children’s teams in regions experiencing a serious lack of a quality base in winter, and will also give an opportunity for high-quality training to all sport lovers, providing comfortable conditions under a roof on the quality pitch.

We express our gratitude to all companies and individuals who contributed to the creation of the football dome: Chairman of Rezekne City Council Alexander Bartashevich, Latvian Football Federation and its Chairman Vadim Lyashenko, the foreign cooperation partner – Slovenian company “DUOL” which manufactured and installed the dome, the company carrying out construction work – SIA “Latgalija”, construction supervision – SIA “Marchuks”, and designers – SIA “Ceturtais stils”.

Team spirit is important both in the game and in the process of implementing this entire project! We wish success and productive training to all athletes! 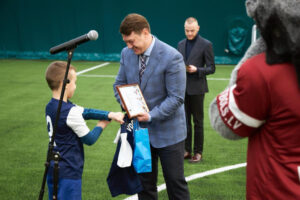