The General Manager of RSEZ, Mrs Sandra Ežmale says: “The Grant of The Year has become the annual tradition in order to reward the most successful companies of RSEZ and to make a summary of achievements of the previous reporting year.”

In the competition for the Grant of The Year NewFuels received the acknowledgement for having the most socially responsible entrepreneurship.

The evaluation commission this year consisted of representatives from the RSEZ Supervisory Board, RSEZ Entrepreneurship Commission and RSEZ Authority. The nominees for the awards were nominated also by Rezekne City Council, Rezekne Municipality and Rezekne Business Association. 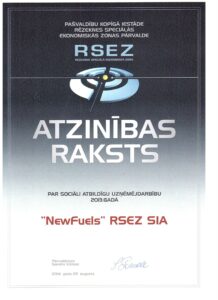 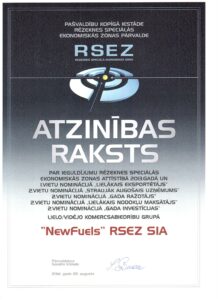