On September 13, 2019, for the eighth year in a row Rēzekne Special Economic Zone (Rēzekne SEZ), after evaluating the indicators of 2018, presented “The Enterprise of the Year” awards. The competition is organised with the aim of acknowledging and honouring the most successful companies of Rēzekne SEZ.

In the group of large and medium companies “NewFuels” RSEZ SIA received Acknowledgment for the contribution to the development of Rēzekne SEZ in 2018 and won the honoured 3rd place as well as was rewarded in following nominations:

1st place in nomination “The Investments of the Year”

2nd place in nomination “The Innovations of the Year”

2nd place in nomination “The Producer of the Year”

In the group of small companies the Acknowledgment for the contribution to the development of Rēzekne SEZ in 2018 went to “Energy Resources CHP” RSEZ SIA as well as the second place in the competition. The enterprise became the best in the following nominations:

1st place in nomination “The Producer of the Year”

We want to thank our employees for the common work in reaching the high results, as well as staff of RSEZ and the Head miss Sandra Ezmale, Rezekne City Council and the Chairman mister Aleksandrs Bartasevics and all the enterprises, their support and cooperation help us to get high assessments and it gives extra incentive for development of our business as well as development of Latgale region and Latvia in general! 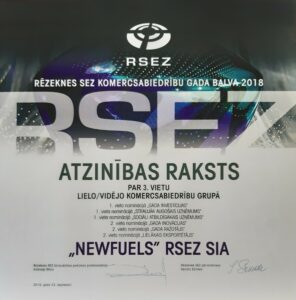 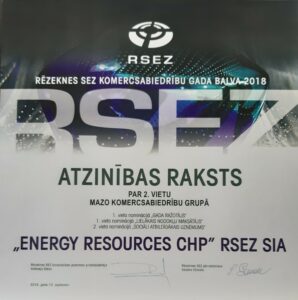