SIA “NewFuels” RSEZ is always glad to support new talents, therefore at the end of summer we considered it an honor to participate in organizing the training camp of the women’s volleyball team of the Riga Volleyball School/Women’s Volleyball Team of the University of Latvia (RVS/LU).

The RHS/LU team already at the beginning of August began preparations for the new season, having established a base in Riga, but last week, from 23 to 29 August, they held a training camp at the sports base of the Olympic Center in Rezekne (OCR), honing their technical skills. This was the final stage of the team’s preparation for the new volleyball season, which is planned to begin with participation in the highest-level competitions in Latvia, as well as in the Baltic Volleyball League and the European Volleyball Confederation Cup.

Currently, the Riga Volleyball School employs 22 vocational guidance coaches and 3 hobby coaches who train 639 students. Trainings for girls and boys take place in different districts of Riga. All students regularly participate in competitions of various levels both in Latvia and abroad.

The RVS / LU team is made up of the most talented students of all coaches, creating a team of Riga Volleyball School. 2020. In September 2020, cooperation with the University of Latvia was concluded, therefore the most talented players of the LU team joined the team. A couple of years ago, the team started from the very bottom – participated in the league of volleyball enthusiasts. Every year, performance improved and new, more ambitious goals were set. In the season 2019/2020, In recent years, the team has won the Latvian Volleyball Championship and the Latvian Volleyball Cup, as well as won volleyball competitions in the Baltic States.

Riga Volleyball School has been repeatedly recognized as the best sports school in Latvia implementing a volleyball program in competitions organized by the Latvian Volleyball Federation, and several coaches have been recognized as the best coaches for both boys and girls and the best young coaches. The head coach of the team is Andrejs Odinokovs, and his assistant is Pavels Selivanovs. Andrejs is a relatively young coach, with great enthusiasm, a desire to learn everything new and pass it on to the team, and Pavels is a volleyball legend, he, as a player, has won all the world’s top trophies – Olympic champion, world champion and European champion.

At the end of the training camp, friendly matches were held with the Estonian team – Audentas SG. It is a team that unites all young and talented Estonian volleyball players who live and train together every day – in a sports boarding school. The volleyball team RVS/LU won in both final games (on Saturday – 3: 1, on Sunday -3: 2).

We sincerely congratulate the team on the victory and wish them continued success in the new season!

We would also like to thank Rezekne City Council, Rezekne Olympic Center, Hotel “Restart”, as well as AS “Rēzeknes dzirnavnieks”, SIA “Latgalija” and SIA “Ceļi un tilti” for their support in organizing the training camp! 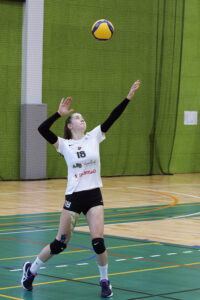 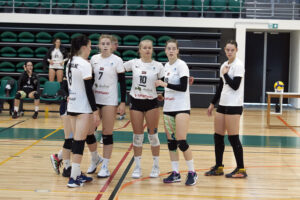 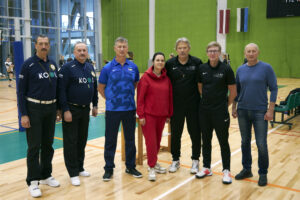 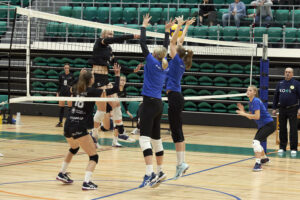 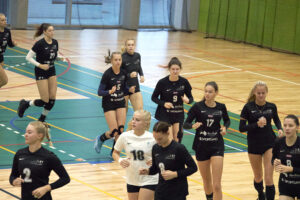